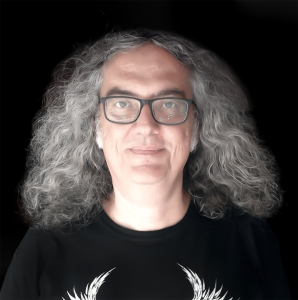 He continued with post-diploma studies under the supervision of the world-famous soloist Kostas Grigoreas. He has attended masterclasses with renown soloists such as Hubert Kappel, David Tanenbaum, Michael Chapdelaine, Adam Holzman , David Grimes, Joseph Urshalmi and others. He holds a degree in Harmony, Counterpoint and Fugue. He also holds a diploma in Composition, achieved with Professor Georgios Bisbikopoulos.

He teaches classical and contemporary guitar in Conservatories and Music Schools.

He participated in various festivals of classical guitar in Pelion, Ermoupolis on Syros, and on Corfu. He has also performed recitals in music stages and classical music halls. He was the guitarist in a duet with soprano Evi Ntouma, performing Rennaissance Music.

He was guitarist for 10 years (2001 – 2011) as a member of the music group Graviton, and he has participated in their music album entitled Graviton. Since 2015, he is the guitarist in the duet N’Eirini, playing in various venues and music festivals.

He has composed works of Chamber Music, played in Greece and abroad by renowned artists and music ensembles such as Eva Fampas, Tania Sikelianou, Kostas Tseregof, Arcadia Quartet, ExQuartet and Smaro Gregoriadou.

Additionally, his work Fluet  was included in the CD album Two Minutes, performed by Iwona Glinka and published by Phasma Music.

In 2019, his work was published in the CD album Sequences, with original compositions for solo guitar, performed by the word-famous soloist Smaro Gregoriadou.

His works, String Quartet I, Sting Quartet II, Fugue’s Tendency for piano, flute and cello, Invocation for violin and piano, AramaTamara for piano, Lament for Theodore Antoniou for flute and Palinodia for String Orchestra have been published in different CD albums by Phasma Music.

In 2017 he digitally released three songs entitled Alexis, in lyrics of his unforgettable friend, Alexis Papakostas.

Additionally, he has composed music for the short film N.O.S.U.G.A.R. (2017) by Eirini Polydorou, awarded with official screenings in various festivals world-wide, nominated for Audience Prize in the 10th Entre Todos Human Rights Short Film Festival (Sao Paolo, Brazil, 2017) winner of the prizes for Best Actress and Film of the Month (Moscow, November, 2017) in the Eurasia International Film Festival and winner of the Critics Award in the Phalcon International Film Festival (London, 2018).